Just a shout out redirection

Hi all!!  Check more of our reports at http://www.sgyakattack.com
This blog is primary inactive but we move on our new content at our website.  So check us out at sgyakattack.com!!!  IT’S ON!

Don’s sharing his spitfire 9 setup. Checkout his simple yet effective blue crate! Simple yet everything is organised for easy access!!

Check out the video here.

Last week, Team Yak Attack was out to play again. This time Don had a huge Snapper but failed to on his GoPro prior to the launch. As he rebaited and wanted to on the cam, another take almost immediately!! As I paddled over to help him on his cam. He said a big “OH NO!!” I thought he had either lost the fish at the end of the line.. or worse a giant catfish!! LOL!! However he said.. “AHH NO SD CARD!” What luck!!! Thus ended up just shooting a picture of his catches.

Nonetheless, I had fun doing some light jigging. As I saw fish activity on my sounder and was confirmed by a take on a live prawn. I immediately switch to the Senses Saury, which saw me hitting a few herrings 🙂 Nonetheless all of them auto-released themselves.

Team Yak Attack is currently sponsored by Senses Fishing. So today we took a test drive on Senses Lures Shake Digger 60 & 90. As a lurer myself for almost 17years. The Shake Digger had quite good castability and a very nice action to go with it.

Unfortunately I wasn’t lucky enough to source out a Barramundi. But Don, managed one Barramundi on a Senses Shake Digger 90, Orange and Black strips pattern.

Hopefully next week would be a better week for fishing 🙂

Leave a comment | posted in Everything under the Sun & upcoming trips, Latest Posts

YAK ATTACK! Epi 03 is out. This episode we found outself at Punggol end. However with no idea which direction to go.. We decided to follow the current. If it was pushing us to the left, we would head towards Seletar.. To the right.. we would head to Ubin.

Hopefully in time to come we would have a challenge theme.. Lure Vs Bait outing 🙂

Here’s the first 2 vid, that we did.
If all goes well we should be doing one every week 🙂

Leave a comment | posted in Everything under the Sun & upcoming trips, Latest Posts

Sorry for the lack of post recently. In anycase, I bring good news… well I hope 🙂
Don and myself we decided in the name of fun to create a humble fishing channel on youtube.

Drums a rolling!!!
Welcome the birth of Team YAK ATTACK!! It’s been 2 weeks in and we managed 2 humble videos for all and hopefully more to come 🙂

This week we launched off Pasir Ris and BOY was the current strong! Don managed a huge take on his lure however the big bully ran off home to his mommy… >.< I managed a decent sweetlips and a small flathead + one alien type of thingy that tried to take advantage of my prawn!

Here's our Youtube Channel! Please check it out!
YAK ATTACK!

Tightlines all.. from both of us!
Don & Mathew
Team YAK ATTACK

It’s been awhile since I last launch. Which I reckon was during the family retreat. Anyway my regular partner Don is unable to launch today as he had some MAJOR LIFE TURNING EVENT happening! Congrats bro! Nonetheless, Jeff and myself headed out to sea to reccee new spots.

We grab our baits 500grms worth of life prawns and realized that we had limited ammo due to the size of the prawns!

Monster prawn at PALM SIZE! Wonder if they would sell this at $20bucks per prawn at Newton!

It was at least 2 times the normal bait size prawns that we normally used. I reckon due to that alot of the smaller fishes were apprehensive into taking the bait.

As we were reccee and moving off.. My sounder showed a nice 5 ft drop. Instantly as I passed it. I used my Mark 4 capability of a trackback function to lock down it’s exact GPS location so that I return to the spot later. However we tested the drop for a mere 5mins and we had little nicks here and there. 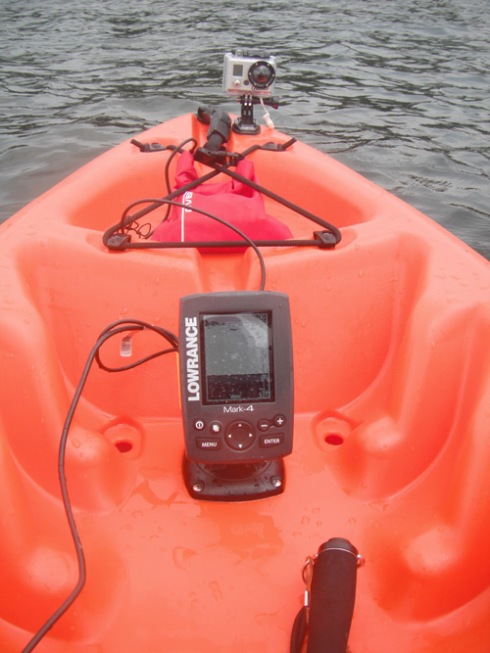 We pushed on and wasted about 1hr with no fish or spots and headed back to the new drop.. Down went the prawns and almost quiet immediately, I had a slight knock but nothing positive. I looked over to Jeff and notice that his tip had dip 3 significant times before he set the hook. This time, his yak was been towed. We realized that it was a big one!

I shouted from a distance.. “Maybe it’s a big SENG!!” and laughed away evilly..
After a short tug a war. It was showing some color. Brown/Chrome and long! The horrible image of a big seng came to Jeff’s mind. Then!!! We spotted a nice black spot at it’s tail! WHAT!! Jeff shouted “Taiwan Ngor!”

Carefully playing and landing it. In all it’s glory. A massive 5lb Taiwan Ngor was landed. The first I’ve seen landed in Singapore Waters. The fight was intense even as a by-stander point of view.

Here’s the happy angler of the day!

Jeff out at sea with his fish! 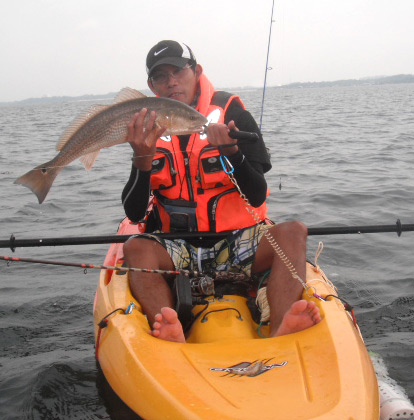 Taiwan NGor at the banks. Compared to my hands.

Jeff with his trophy. 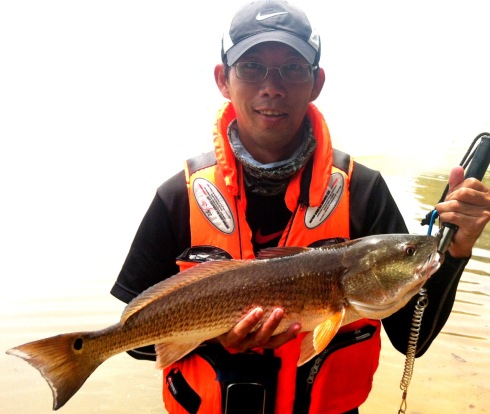 Happy days!! At least we managed to lock down a new wreck location and the new drop all thanks to my new underwater eyes!

When I’m not Yak Fishing I do Pond Fishing!

At times, when I’m free and I’m not yak fishing, I do go to ponds with my friends and brothers. Here are a few shots of pond fishing that was done recently. 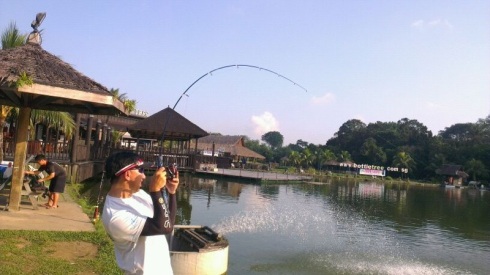 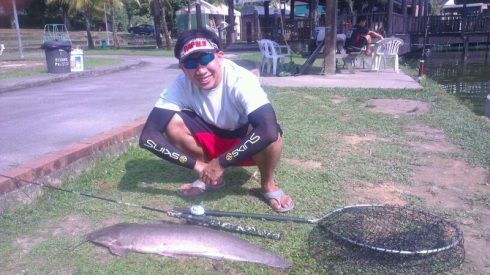 Here’s some shot of my brother enjoying his birthday rod gift that was ordered by his wife. Custom by me 🙂 We managed to give Dave’s GT & Barra pond a go on his birthday. 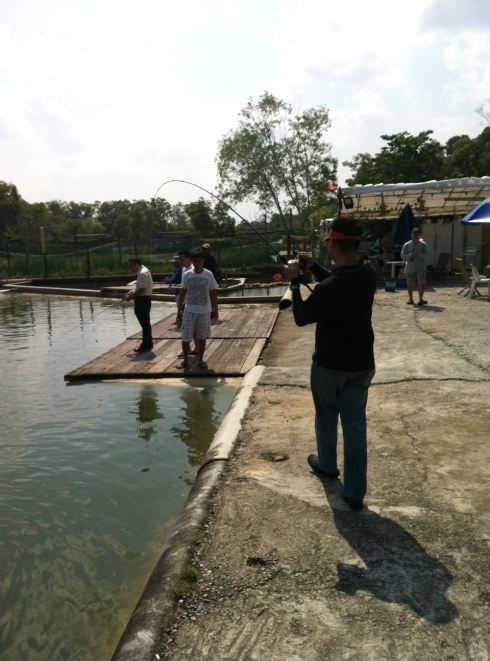 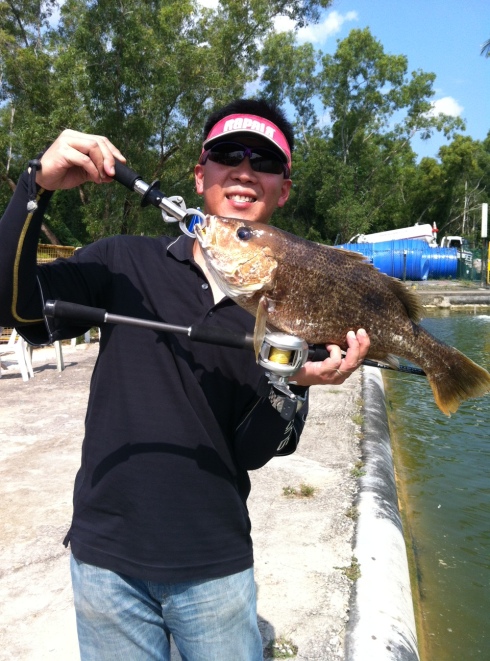